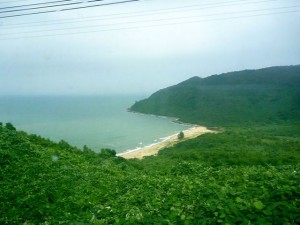 Fox and I consider ourselves to be “train lovers.” This is what prompted us in 2010 to spend a week on the Trans-Siberian, and also what made us decide to take the Reunification Express, the 40 hour train across Vietnam bringing us from Hanoi to Saigon. We perhaps should have thought twice when even the man in the booking office thought we were crazy. He suggested the flight, which was almost the same price but got us to Saigon in less than an hour. We explained to him our love of trains, and decided to book the trip straight through. 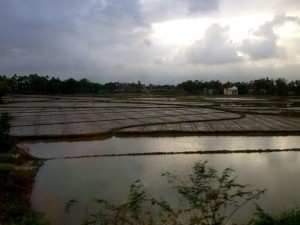 Our train, the SE3, was meant to depart Hanoi at 11pm on Thursday and get us into Saigon at 5am on Saturday. This translates to 2 nights and one full day spent on the train. We found the persistent rocking of the train to be rather annoying, it made sleeping and walking around difficult… not to mention the water in the toilet splashed up and over the sides with each rock. This made using the rest room a rather unpleasant experience. I also had the distinct feeling that our bed sheets were unwashed, a feeling that was confirmed when our compartment-mates changed three times without the sheets being changed in between. It was also a bit strange when we made our way to the dining car. The only people back there were train attendants and employees, laying on the benches with their bare feet up on the tables. When we walked in, they were unbelievably surprised and didn’t have any food to offer. I don’t think the dining cars in these trains are ever used.

Despite some of the discomforts of the train, we were able to enjoy some beautiful scenery. Rice paddies, rivers and mountains. About half way through our trip, there was a point where we were riding along a cliff with sprawling beaches below us.

Overall, I’d say the experience was an interesting one… but probably not one we’d do again.