This entire Ghana experience has almost come to an end. When I look back at the whole thing, what do I have to say?

Firstly, it wasn’t always a crazy adventure. There were plenty of days spent cloistered in my room, watching re-runs of American TV shows while eating chocolate chip cookies. It’s also quite amazing how concepts that initially seemed ‘strange’ started to become commonplace for me: hand washing laundry, storing water in buckets to use during outages, eating food with my hands, stopping to greet everyone you see.

I won’t lie, there were also plenty of adventures. I’ve pet a wild monkey and I’ve sat on the back of a crocodile, I’ve even eaten an antelope! I took a $4 walking safari where I got to see elephants in the wild. I was attacked by a red ant colony while climbing up the side of a rock. I’ve bumbled around the biggest open-air market in West Africa. I bought a black magic sword from the juju market. Not to mention all of the time I’ve spent at the beach! 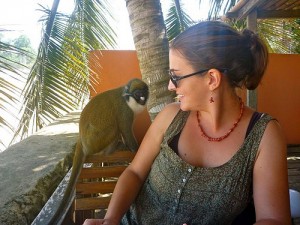 On the downside, the environment here has really tested my health. Not only did I manage to contract both malaria and typhoid, but I can count at least six instances of e-coli that had me running to the pharmacy. These have all been food borne illnesses, so I can’t really play the victim card. Even the Malaria was due to a chicken-related incident that had me barfing up my Malarone.

After this most recent bout of e-coli earned me my second emergency room IV drip, I decided to move my flight up a few days. I will now be returning to the states this Saturday instead of next Saturday.

So, what are some of the things that Ghana has taught me?

2) I am obsessed with technology. I don’t think this experience has broken me of my obsession, but at least it has made me aware of my level of attachment.

3) When things break down, it’s not the end of the world.

4) I have the tendency to feel rushed or hurried. Sometimes it’s OK to slow things down.

It’s pretty impossible to try and sum up this entire experience in just a few sentences. It has been challenging, exciting and at times even mundane. I have learned a lot about myself and a new culture. I have even managed to make some good friends. In the end, it was an incredibly rewarding experience that I felt lucky to have.