This Easter post comes to you belatedly due to an unfortunate case of Typhoid that knocked me out for the better part of a week. More on that later, but first I bring to you my account of the Kwahu Easter Festival.

Over the long Easter weekend, I was kindly invited to the lush and mountainous Eastern Region to stay with a friend and fellow volunteer. She lives in a lovely bungalow perched atop a mountain very close to the town of Abetifi. This is an area that becomes very popular during the Easter time, partially because of it’s annual paragliding festival. 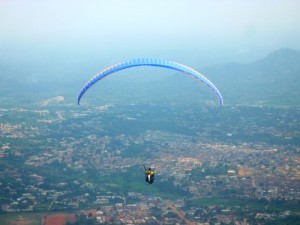 The Kwahu Paragliding Festival was quite a sight. Paragliding pilots from all over the world descended upon the mountain top, where for 100 Ghana Cedis (about 60 US Dollars) brave participants could strap themselves up and jump off a cliff. The festival happened in true Ghana form: it started 5 hours after the scheduled time and began with an unnecessarily long address given by various officials. Jumpers were assigned numbers randomly as opposed to in the order of arrival, despite the fact that some people came several hours before others. Those numbers were rendered pointless after certain groups started “dashing” (a nice word for bribe) the organizers to move them to the front of the line. The majority of the people jumping were foreigners. Not entirely surprising.

Further down the mountain, I had a chance to see what a festival is like around these parts. I don’t know what I was picturing; maybe something more carnivalesque. Perhaps I had the Japanese street festivals in my mind with their elaborate costumes, traditional music and dancing, delicious food and beautiful crafts at every turn. This Easter festival seemed like it is a reason for people to drag out massive speakers, drink wine straight from the box and dance in the streets to pop music.

We did have the opportunity to attend one live music event. I have seen many live performances since being here, mostly vocalists singing pop-gospel tracks over synthesizer tones. But one evening we were able to catch a performance by Kojo Antwi, it was very good! Not surprisingly, the opening act started at midnight. Kojo Antwi didn’t start until about 12:45, and from what I hear he went on until the early hours of the morning. I had to bail out, I was starting to feel what I now know were the beginning symptoms of Typhoid.

All in all, an interesting weekend! I was happy to see what the Easter festival was all about, I was glad to see paragliding in action (the next time I get a chance I might give it a try) and most of all I was happy to spend time with my friends.