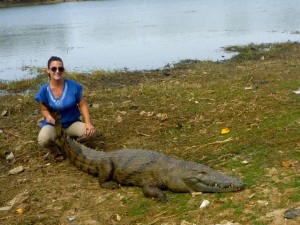 Paga is a small town on the border of Ghana and Burkina Faso. The town is frequently visited not just because it is a border-crossing point, but because it is home to a sacred crocodile pond. It is believed that a crocodile once saved the life of an important chief. As a result, the crocodiles have long been deemed sacred. It is actually a capital offense to kill a crocodile, and they receive proper burials.

Like many of the other animal reserves in Ghana, these crocodiles seem to know that they are safe and protected. As a result, they are not very ornery creatures. Believe it or not, they will actually let you hold their tails and sit on top of them. Of course, they are first lured out with a live chicken treat. They didn’t feed him the chicken in the end though. I came too early in the morning and they didn’t want him to be full of chicken when the other tourists arrive. They apparently continue to lure the croc out with the same chicken all day, only feeding it to him in the evening. I have to say, if a delicious chicken was dangled in my face several times a day and I couldn’t eat it I’d be one pissed off crocodile! That didn’t seem to be the case for this guy though. He still came out of the pond, and he still let me get all up in his business. 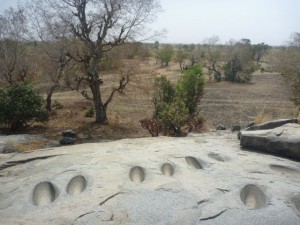 After the crocodile experience, I hopped on another motorbike to visit a former slave camp nearby. This was one of the many camps where slaves were kept after they were initially captured. They were brought to this camp and forced to live there until someone would come to buy them, after which they were forced to walk hundreds of miles to the castles along the coast, and then sent off on a boat to live a lifetime of servitude (that’s IF they survived the journey.) Of course, they were not told where they were going. They were brought to the camp, and first starved to make them weak so they could not fight back. When prospective buyers were coming, the captives were fed and rubbed down with shea butter to make them appear ‘shiny and strong’. There were holes carved into a big rock that people were forced to eat out of. There were rocks that were used for drumming so people could be forced to dance and “be happy.” There was even a rock where people were chained up and forced to stare at the sun, getting whipped when they refused. Depending on the offense, these people were sometimes left to die. Right next to the punishment rock, there was a collection of mass graves.

After the slave camp, we visited Paga Pia’s Palace. The chief lives here on the compound with his family of about 200. Outside of the compound there is a platform for animal sacrifices, fresh with blood and feathers when I arrived. Most interesting was the chief’s private quarters, only accessible by ladder and a hole on the roof. Nobody else is allowed inside of these quarters, not even his wife or children. I snapped a picture, noticing that next to the structure there was a giant satellite dish.