Admittedly, my primary reason for venturing to the far northwest corners of Ghana was to visit the tiny village of Wechiau. Just outside of this village there is another wildlife sanctuary, this one dedicated to protecting hippopotami (finally, a reason to use that plural!) 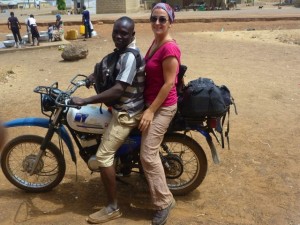 When I arrived at the visitors center in Wechiau, I was informed that the reserve was approximately 18km away. I had the choice of riding a bicycle for two hours in the hot midday sun with all of my belongings on my back, renting a van (tro-tro) with room for 25 people, or hiring a motorbike to take me there. You can probably guess which one I chose.  The ride to the reserve was scary at first, but as my fears dissolved it was amazing. I am starting to see the allure of these motorbikes, they make you feel pretty badass!

I was a bit surprised when we arrived at the reserve and I was shown my accommodations, a tiny room with an old linen-free mattress on the ground. Another option was to sleep on the roof of the lodge. There was a third option of sleeping in the woods on a tree platform overlooking the river, and Burkia Faso on the other side. I wanted to go out to the platform, but I was apprehensive about it as I was a sole female traveler.

Or so I thought.

A few hours later, I noticed two girls peek their heads out of the kitchen of the lodge. Apparently they had been napping when I arrived. They were planning on sleeping in the “hippo hide” platform that evening, so I decided to join them. 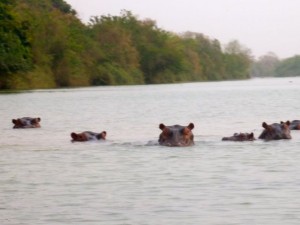 When the girls woke up from their nap, we all walked down to the river with our guides where we were shown a narrow fishing boat. As we paddled down the river, I thought every rock was a hippo. Finally, as we were rounding a bend I saw an entire herd (?) of apparently scared hippos jumping, running and diving off of some rocks into deeper water. A young boy had come along just as we were arriving and thought it was funny to scare the hippos. As a result, they went to hide in deeper waters. Our attempts at a hippo safari that afternoon resulted in some underwhelming ear-and-nostril views. 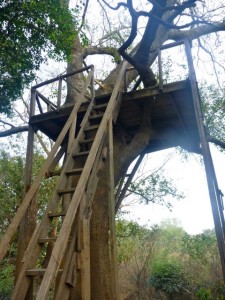 After the safari, we made our way out to the hippo hide. We set up some mattresses and mosquito nets, and quietly ate the food that we were told to carry in from Wa. I finally pried out of my new travel companions that they were from Germany and Norway and were volunteering at a children’s home. The girl from Germany was a recent graduate from high school and was staying for 6 months. I have to say, I wouldn’t have had the stones to fly to Ghana by myself and stay for 6 months when I was fresh out of high school!

The next morning, I decided that I would head back to Wa rather than spend another night at the reserve. There wasn’t much there, and with the girls leaving I wasn’t so thrilled about the idea of staying there by myself another night. Before I left, I wanted another crack at seeing hippos. My guide seemed a little surprised that I wanted to go out again, but I figured I came all this way to see some hippos! As my guide and I got in the boat, we noticed that the hippos were actually sitting just off the shore. This time they were less submerged and you could see their bodies, they were also playing around a bit before they eventually settled down to sleep. Sleeping there in the water, they really look just like rocks. 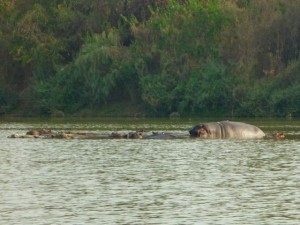 We couldn’t get much closer than we did because hippos are actually quite violent creatures when they feel threatened. Like many of the other animal reserves in Ghana, it seems that these animals are pretty comfortable because they realize they are respected and nobody is going to hurt or kill them. Still, you don’t want too get to close to them.

After my second safari, I decided it was time to head back. Another awesome motor bike ride and I was back in the village, boarding my tro-tro back to Wa.