From Tamale, the next phase of our journey would take us to Mole National Park. There is one bus that leaves every day and goes directly to the park. According to our Brandt travel guide delays, break downs, bumpy dirt roads and over packed conditions can all collide to make this “one of the more memorable experiences in Ghana.” Nonetheless, they said, with the promise of ample elephant sightings it was supposedly well worth the hassle to get to Mole National Park. 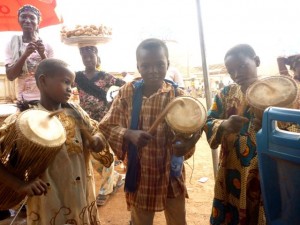 The guide told us to be sure to get to the station early to buy our tickets in advance, as the bus is oftentimes very crowded and seats can sell out. We delayed a bit, but we were lucky enough to score some tickets despite arriving around 9AM. The bus was scheduled to depart at 2:30, we were told to arrive at 1:30. A few hours later we showed up, expecting to wait about an hour for the bus to arrive. That hour turned into two, then three, then four. Thankfully this bus station was anything but boring! We sat in our seats as women passed by selling all sorts of things: snacks, drinks, clothes, toys, jewelry, fabric, phone credits, anything you can imagine. At one point we were even approached by some small children who put on a drumming performance. When the bus finally pulled up five hours after the scheduled departure time, the wait didn’t feel so bad. 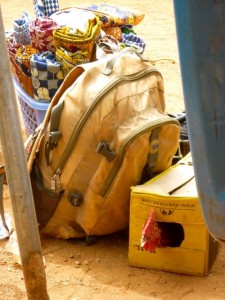 Once the bus did pull up, it was stormed by people. This is typical for Ghanaian transport – when the bus comes, everyone runs to it and starts pushing their way in. It didn’t matter that we all had seat assignments… and even the people with seats that were double-booked were assigned new seats… people were still in quite a hurry to get on that bus. Of course, with this sense of urgency going on all around me, I get right in there and start shoving along with everyone else. It was a madhouse inside the bus, with people trying to pass up and down the tiny aisle to find and argue over their seats. Once the chaos died down and everyone had their seats, they started allowing people on to take the “middle seat” – otherwise known as the aisle. People sitting on buckets, or standing for the entire duration of the trip. I can’t imagine that is a pleasurable way to travel. As I’ve mentioned before, this is really the only option that exists sometimes.

Once the bus started moving, it wasn’t long before we turned off the main street onto the road to Mole. We traveled this road in all of its bumpy, dusty glory for about 5 hours. Since it was dark, I was rocking a head scarf, a bandanna-turned-face-mask and my over sized sunglasses to protect myself from the dust.

As the bus moved along, all of the Ghanians gradually got off. By the time we reached the park it was just us foreigners. At about 11PM they booted us all out at the gate to make us register and pay our fees. After this slow process, we piled back on the bus and made the final stretch to the hotel.

It was around midnight. Thanks to my brilliant “two of every clothing item” packing technique, I needed to do laundry before going to sleep if I wanted something clean to wear the next day. Around 1AM I set my alarm for the 7AM walking safari and finally climbed into bed.