The tro-tro is a very common mode of transportation here in Ghana and in much of West Africa. Anytime you need to go someplace, you simply walk out to the street and yell out your destination until a tro-tro heading in that direction stops to pick you up. You can grab a tro-tro heading just into town, or you can catch one making a several-hour journey to the next big city. The wide availability and cheap cost make this mode of transportation unbeatable.

Now, a tro-tro is just a minivan. In the back there are typically four benches for people to sit on. Each bench then has another seat that folds down, so there is no aisle for people to maneuver through. On these benches, they will squeeze as many people as physically possible. It doesn’t matter how wide/narrow the passengers are, or how long the journey is. In each of the rows will fit at least 4 or 5 people, plus another 4 or 5 in the front. Yes, we are talking about a minivan with 25 people in it, if not (way) more. For instance, a mother with small children may only pay for one seat, then squeeze in with her baby still tied to her back and another child or two on her lap. In addition people may bring all kinds of cargo onto the two-tro; televisions, live chickens, you name it.  Each tro-tro also has a “mate.” He is the guy who leans out and yells the destination, opens and closes the door for passengers (often while the van is still moving), and collects the money. 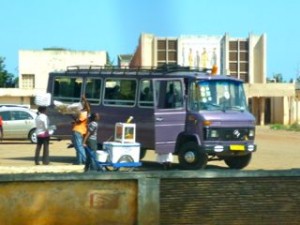 If you get on your tro-tro at the station, the driver will usually wait until the van is full before he leaves. This means people can sometimes wait for an hour or more, not wanting to get out of the (overcrowded, non-air-conditioned) van for fear of losing their seat. Before the tro-tro goes anywhere women and children will crowd around trying to sell items like cookies, drinks, ice-cream, phone credits, oranges, bread, or pretty much anything you need. If you don’t see what you need at the station, most likely someone else will have it as you are waiting in traffic or stopping to let passengers on/off.

Riding in a tro-tro is interesting to say the least. There you are, crammed into the back of some van with 25 other people. The driver is NOT driving slowly, and he’s either tailgating within inches of the next car or jerking into the next lane to overtake the cars in front of him. All the while honking his horn to alert everyone around him of his presence. He’s alerting the oncoming traffic that he’s swerved out into their lane. He’s alerting pedestrians not to make any sudden movements or step into the street. He’s alerting passengers that he is taking fares. I have to say that I was afraid to take tro-tros before I came here, and I will admit that I’m still a little afraid.

The problem is that the tro-tro is the only affordable mode of transportation for many people. To give you an idea, when we went to the beach resort 15-minutes down the road we spent 15 Cedis (almost USD$10) to get there by  taxi and 0.60 peswas (USD$0.37) to get back by tro-tro. Additionally, it can sometimes be the only option between less-traveled routes.

3 thoughts on “The Ghana Files: What is a tro-tro?”