This weekend, I had a friend come to visit. She is a fellow volunteer also working in Ghana in a small town up north called Bechem. We have both been experiencing some challenges recently, so we thought it would be refreshing if she came to Cape Coast for the weekend. We could hang out on the beach and stuff ourselves with American comfort foods.

Our weekend began on Friday afternoon when we decided to head to the Anomabu Beach Resort, about 20 minutes outside of Cape Coast. According to the Lonely Planet, “volunteers in need of downtime dream about this place” with it’s “beautiful white sand beaches” and “exquisite restaurant.” The prices for rooms were a bit high, so we opted to sleep in a tent on the beach. This was not only the most economical, but in my mind, the most fun option!

We had a bit of a challenge getting there. We had planned to take a tro-tro, but when we arrived at the lorry station we noticed that just about everyone else in Cape Coast was going in the same direction on a Friday after work. We stood in line for a few minutes and were unable to get a clear answer about how long the wait would be. One thing I am learning is that people in Ghana are much less time-oriented than Americans are, at least when it comes to transportation. We decided that this time we would take a taxi instead.

I could not believe my eyes when we arrived at the resort. The place is beautifully secluded, located in a little rocky cove. The beach really was pristine (they had people walking around and picking up any trash that swept in.) We hit the restaurant and the staff was just as courteous and attentive as a restaurant back home, and the coconut shrimp were like little bites of heaven.

Our time spent at this place was brief but refreshing. It was a very tourist-friendly place, filled with families and older-couples. Usually these kinds of resorts are not my “scene” – but it was really nice to go and visit for a little while, to rest and recharge. 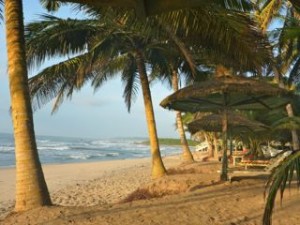 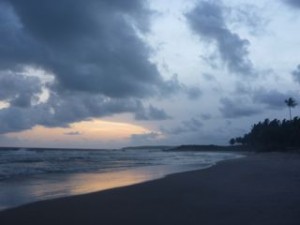