Today was my first time at the beach in Ghana, and it was amazing. The weather was perfect; sunny but with a nice 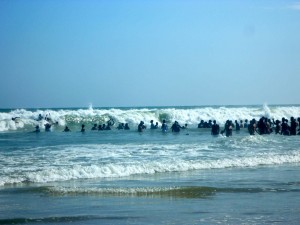 breeze and some clouds. I was able to go the entire day without burning! Granted, I was applying sunscreen like it was my job and I was also the only person around wearing a big floppy hat. The waves were incredible, I have never seen anything like it. The would start pretty far out and grow to such enormous heights. When they crashed onto shore a few of them made it even as far as the restaurant area where we were seated, catching the empty chairs and making them float away. There was a tiny section of the beach that was sectioned off for swimming. If you tried to swim in the other areas, a lifeguard came and chased you out. Even the waves in the approved swimming section were huge. 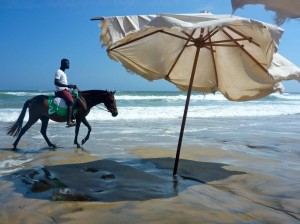 When we first arrived at the beach we were bombarded by people trying to sell us things. There was artwork, sculptures, beads, clothing and even men with horses offering rides! After we ignored them, people eventually stopped coming over. The only thing I did partake in was a fresh coconut for 1 Cedi. Fresh coconut water and coconut jelly that you scoop out with part of the shell? So delicious!