So I guess as part of the process for getting our work permit, we needed to have another medical checkup. We woke up this morning, piled into an SUV and headed to the Akai House Clinic. It was in the part of town where all the diplomats live, and was extremely modern. It was much nicer than some of the health centers I have been to in New York City! Since we were a group of five, they moved us through the process pretty quickly. A brief physical exam, followed by lab work and a chest x-ray. Nothing to write home about! I was just really impressed by the facility: http://www.akaihouseclinic.com 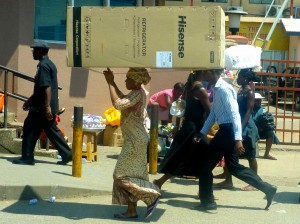 After our medical exam, we took a drive around town. We passed by the market in Accra Central, they seemed to have everything you could want being sold in little stands or even off the top of some woman’s head! No lie, I saw women carrying refrigerators on their head. We visited a used bookstore and grabbed some reading material for a few Cedis. Much better than the bookstore we visited the other day, which was asking Barnes and Noble prices.

It’s Saturday night, so rumor has it one of the volunteers has a friend coming to pick us up and go to a nearby jazz club. It will be nice to catch some live music!