So… I’ve arrived safely in Accra. I’ve been here for about 24 hours now, it’s all still sinking in. My flights went smoothly, my second flight I was even put in the “Economy Comfort” area which boasts an extra 4″ of legroom. Pretty cushy! I tried to get some sleep on the flights, but I was way too antsy. The whole process at the airport was interesting. The airplanes did not pull up to a gate, so we all had to exit using stairways and then take a shuttle to the actual airport. After that we went through passport control and got our bags. There was a huge mass of people trying to get into the customs are, but we all made it through pretty quickly.

The country representative for our organization was waiting for us at the airport with his driver to take us to our hotel. As we were standing in the parking lot loading our luggage into the back of the van, I could hear drumming off in the distance and getting closer. After a few minutes, there was a huge group of musicians and dancers coming down the street dressed in the colors of the Ghanaian flag. They were playing the drums, singing and dancing down the street. It was awesome! I guess there was a flight coming in with the Ghanaian soccer team, and the group was there to greet them. So we had a proper musical greeting! 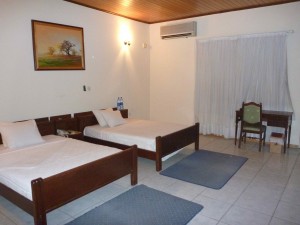 Our hotel is outside of the city center, more in the airport part of town. It’s called the Hotel Georgia. I am sharing a room with another volunteer who is also named Amy. The hotel is nice, it’s clean and the staff is friendly. There is air conditioning and a TV in our room and a water heater in the bathroom, with a shower head. Besides our hotel and the airport, I haven’t really seen or experienced much of Ghana. I tend to be the most excited about food when I travel, but the food at the hotel isn’t much to write home about. It’s a choice of some carb (plain or fried rice and french fries) and a piece of meat (chicken and tilapia, grilled or fried).

After sleeping until noon, hanging around and waiting almost two hours in the lobby for lunch to be prepared, and a short meeting with our county representative we decided to take a cab to the Accra Mall. The mall was pretty upscale, lots of little boutiques selling clothes and accessories. It was crowded and full of well-dressed G 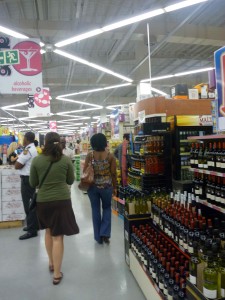 hanaians and expatriates. We stumbled across the Ghanaian version of Wal-Mart called Game. The prices were INSANE. Someone was looking at one of those tea kettles that you plug in the wall, it was $100 Cedis. That’s $63 USD! In the end we just bought two packs of water to keep at the hotel. We ate dinner in the food court at the mall, many more underwhelming choices consisting again of mostly fried or grilled chicken and some kind of carbohydrate.

When we first arrived at the hotel, the promised WiFi was not working. Everyone was using the one working computer in the lobby. I figured I would wait until the WiFi was fixed, or until we got our USB modems before I got online to update everyone. Thankfully someone came to fix the WiFi tonight! It’s extremely slow… but it’s better than nothing.